Singers, when can we meet again?


Short answer:  Nobody knows yet.  Click here to help fund the answer.


Long answer:
There is lots of news crossing my desk from choral and singing experts and not-so-experts about "safe singing distances" while we are amid the Covid-19 pandemic.  It's all guesses, everything from 3 feet to 24 feet to "wear masks" and "we can't wear masks" to "who cares" and "nothing is safe".  Some notable answers:


American Federation of Musicians Unions Returning to Work Safely Guidelines
The New York Times and the ACDA Choral Leaders' conversation in May agree
Multnomah County keeps a webpage for small civic groups: https://multco.us/novel-coronavirus-covid-19/faith-based-and-community-groups-covid-19-guidance with the usual
and:
Oregon.gov talks about what's allowed for Multnomah County for "Phase One":

Since my groups and our audiences are "at risk" and often larger than 25, the rule is still "NOT YET" til we get real answers.


Happily,  dozens national and international sports and musical organizations, including the Barbershop Harmony Society, National High Schools, and the American Choral Directors Association have commissioned a study to find out the actual answers.  You can read about it and even donate at https://www.nfhs.org/articles/unprecedented-international-coalition-led-by-performing-arts-organizations-to-commission-covid-19-study/

So, right now, what to do?   The most optimistic answer is "No singing together yet, until we find safe ways to do it."   We might know some ways soon, so cancelling meetings and concerts still a few weeks off is probably premature.   If a county isn't open for meetings and concerts, and preventative methods are still unknown, events can and should be cancelled, even "at the last minute".  We can and do replace the cancelled events with online meetings and choosing later dates.


And that's what we're doing, cancelling and altering our plans, one event and one rehearsal at a time.   That's the best we know right now.  I know we'll meet again some sunny day.
Yours, Gary Shannon
PS.  Vera Lynn, singer of We'll Meet Again, passed away June 18, 2020 at 103.  See BBC's obituary.
Posted by Gary Shannon at 5:19 PM No comments:

Why are you passionate...

This question in a Learnivore job application via ZipRecruiter stumped me for a while:

3.  Why are you passionate about this field?

My gut answer is

As true as that is, it didn't satisfy the question WHY.  It seems obsessed,  emotional. and unreasonable.  I had to dig deeper to find why an intelligent, balanced, thoughtful man would foster this consuming obsession in himself.  What I sent more answers the question:  "Why should EVERYONE be passionate about this field?"

Yes, that's true and I'm happy.  Is that a good answer for you?

Posted by Gary Shannon at 11:49 AM No comments:

As done before, here are translations for

Ein Deutches: A German (Brahms would have gladly called it "Human" ref.)


Requiem: [from Latin requiem, "rest"] Service for the time of death.

und mit Ausdruck: and with expression

Posted by Gary Shannon at 6:00 PM No comments:


"Something so old no one knows it", 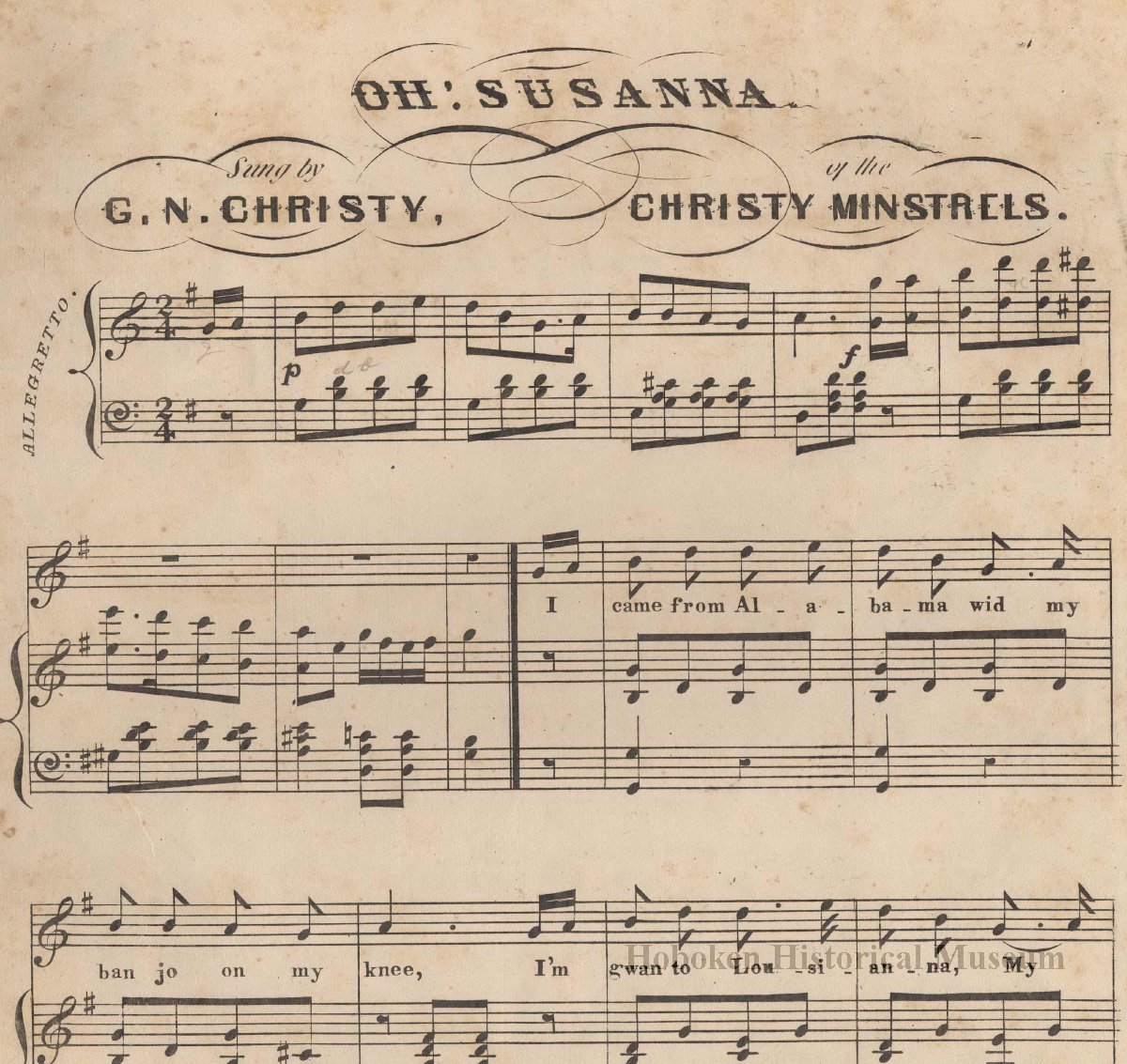 quotes "Oxford American, a Magazine of the South" in 2012.  The article inspects recent recordings and the political, historical, and racial nuances of the old song.   I'm more practical as a musician:  I want to know "How does the song actually go so we can sing it as the author intended and the audience will like it?"  Well, they're right:  nobody quite knows how it goes. 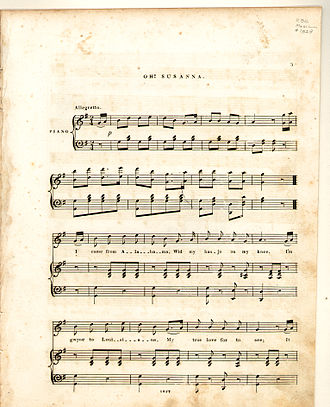 Steven Foster wrote the words and tune in the late 1840's, but the sheet music publications of 1848 don't agree on the details of O Susanna's exact words or rhythms.  Two sheets claim "oldest publication" in 1948. New York's C. Hold Jr. publication displays "Christy Minstrels" and "G.N. Christy" prominently.  Baltimore's F.D. Benteen credits "The Ethiopian Serenaders" and "Wells" for singing and writing it.     Music Publisher W.C. Peters of Cincinnati had known and worked with Stephen Foster before.
Stephen Foster isn't credited on any of them, so none gets preference.

Gosh, his manuscript would be priceless, but it's nowhere to be found yet. "Beautiful Dreamer" and "Old Black Joe", we've got the mss copied online, if you care to pay to peek at them.

Where the written versions differ, I can use original recordings, but not for O Susanna.  The first well-known recording, made in 1925 by vaudeville performer Arthur Fields, sounds familiar  with skipping rhythms and a bright bounce.   He doesn't sing the rhythms consistently, but he includes all four disaster-riddled verses with cheery delivery.   So it does serve as an early popular example of how at least one fellow sung it and sold a lot of copies, but decades after Stephens death in 1864 doesn't really tell us why the song was so popular in the first place

But this isn't 1848,  it's 2019.  So the question becomes, "How do people like to hear and sing it now".   To answer that, you do a survey of regular folks and what they recall of the song.   After interviewing a half-dozen folks, I learned this:

~ Everybody sings the words "Oh!, Susanna" on the notes fa fa la la, ...
~ Nobody has heard it sung fa fa fa la (as most early editions write it.)


~ Almost everyone fumbles the words.


Those tell what's familiar and wanted in a sing-along:


I come from Alabama with my banjo on my knee.
I'm gwine to Lou'siäna my true love for to see.
It rained all night the day I left, the weather it was dry,
The sun so hot I froze to death.  Suzanna, don't you cry.

Oh, Suzanna, Oh don't you cry for me.
I come from Alabama with my banjo on my knee.

I had a dream the other night when ev'ry thing was still.
I though I saw Suzänna a-comin' down the hill.
The buckwheat cake was in her mouth, a tear was in her eye.
I said "I'm comin' from the South.  Suzanna, don't you cry."

Oh, Suzanna, Oh don't you cry for me.
I come from Alabama with my banjo on my...

And I bet, if  the singers stop right there, the audience will still sing:


Posted by Gary Shannon at 3:37 PM No comments:

What singers are thinking.

While Thom King’s iconic cartoon, “What They Think About When They Sing,” has entertained our community for some thirty years, I am honored to have created the first publication to reprint it with his permission and offer him my heartfelt thanks for the clean copy.

I admit to singing Tenor.
Posted by Gary Shannon at 12:19 PM No comments:


I just enjoyed the honor of accompanying a talented teen in a flute contest.  Here is a summary of the judge's instant feedback, a nice lesson in itself:

Never breathe during a trill.   To prepare, find a place to breathe where you'll have plenty of air to do the notes leading up to and away from the trill, the alternating trill notes, the termination notes, and all the way to the end of the last note.

Trills match the tempo of the music around them, faster in fast tempos and slower in slow movements,

Nerves take the breath out of you.  Flute takes a lot of breath;  trills are especially inefficient.  In practice, give yourself more than enough breaths so you're ready for nerves in performance or competition, and still have plenty of breath.

Tune long notes, especially octave leaps, carefully.  Why do composers do that to us?   It easy for anyone to hear tuning issues when the note lasts a long time.

New skills, say you've just learned double-tonguing, won't be consistent.  Even so, don't give up on them, keep practicing, and use them.  If you don't use it, you lose it.

Exaggerate  dynamics.  You are doing them, but they should be more.  In a large hall, for an adjudicator who is far away, you'd need to shoot for far to much variation.   Practice doing far too much dynamic variation.   If you wonder if you're driving the audience crazy with your volume changes, it's probably just right.

Overall, it was a lovely performance.


I agreed.
Posted by Gary Shannon at 1:03 PM No comments:


Hi Gary: I sure enjoyed seeing you at the concert last night!  I LOVED it!  I was blown away by the "back up band" being a full symphony, and choir!   I'm not an opera buff, and would have preferred a few more super-text lyrics, but my, what sound!  He can be a difficult performer to watch, since he does not use his body as sighted people do, but if you close your eyes, you find he puts everything he has into the song, great sensitivity and a purity of emotion.  I imagine even non musical folks connect with him at that aesthetic level. Of course, all the "encores" were rehearsed, but so satisfying for his fans.  I'm assuming the little girl on the edge of the stage was his daughter.

I'm glad you had a great time.   Here are some answers you may certainly share:

Portland Symphonic Choir accepted the contract to provide 60 singers for the June concert in mid-April after negotiating since March.  As PSC's tenor section leader, I appointed the choral tenors and helped my colleagues in the other sections chose theirs.  There were a few substitute choristers on standby, and we needed them due to unexpected illnesses and such at the last minute.
We first had access to our music as online scans on May 29 and got paper copies during our first choral rehearsal on Monday, June 11.  We had one more choral rehearsal on June 18.  We learned some details about the conducting and tempi  from Doug Schneider, PSC's usual accompanist, who ran our rehearsals:  he'd been to their first rehearsal playing keyboards for the orchestra on June 17.
Our only rehearsal with the orchestra, conductor, and guest performers was at 4:00 on the day of the concert.  Andrea himself wasn't there as expected because his flight from Las Vegas had been delayed due to the president's flight commandeering the LV airport that day.  We only could only press on Andrea-less and hope he'd arrive on time for the show.

The conductor had already toured with Bocelli and knew precisely how to predict his tempi and rubati.  I myself was asked to fill in for A in rehearsal, but I declined the nomination: Italian opera isn't my forte, I don't know A's typical nuances, and I had to practice my own job in the show.  The conductor wheezed some of the tenor phrases when they mattered for timing.    For us choristers, though, it was the usual game of FOLLOW-THE-STICK,  since the hall was so large, amplified and wet that we couldn't trust our ears for the beat. (Actually, we followed his right wrist - his stick technique is unusually florid.)   Rehearsal ended at 6:00  with no sign of Andrea.
Andrea arrived at the MODA center slightly after 7pm in a cortege of limousines, had a supper in his dressing room (we all got a catered a meal of cannoli and chicken piccata), and you saw what happened after that.
It's uplifting and inspiring to witness humans doing such remarkably difficult and and exacting artistry, even when you cannot hear clearly, cannot see their faces, and have your own part to play in the production.  Andrea's mezza-di-voce above the staff is well known and regarded, but hearing it done in real time is breathtaking.  I can do that sort of thing well about one time out of every ten tries:  he got it perfectly every time.   In the hundreds of notes he sang, I heard only two that were less than perfect - they they only proved that the fellow was human and doing this live.
I kept (stole?) my music and backstage pass as memorabilia.